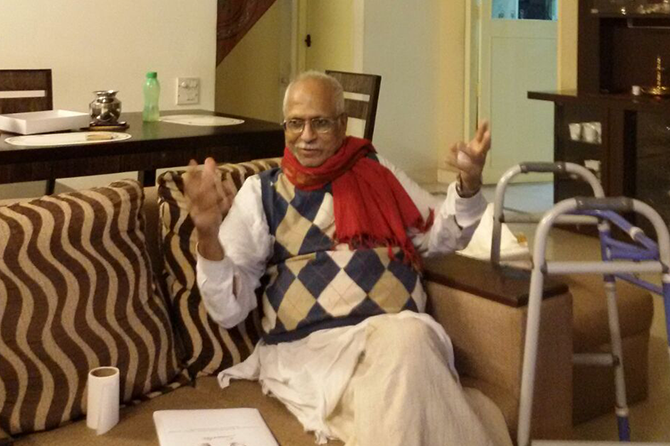 On a warm spring evening of 1970, I met Arun – a handsome young journalist on the beautiful tree lined Sansad Marg, New Delhi.

I was aged 12 and was with Venkatram – my father, with whom Arun had built strong personal bondage by then. The UNI office where Arun worked was around the area as well as the Socialist Party office of which Venkatram was the All India Joint Secretary. I don’t remember much of that first meeting, except that both Venkatram and Arun were intensely discussing some subject very passionately.

I lived In Delhi just for a year and hence, my meetings with Arun were few, but enough to kindle my young mind and embed an impression of an aggressive, passionate journalist.

During the next decade or so, I realised that Venkatram and Arun had a much closer relationship, much beyond what I had imagined during my Delhi days. He adored Venkatram like his philosopher and guide, and to Venkatram, he was like an elder son. However, I never met Arun in that decade or even if I did, don’t remember.

My relationship with Arun suddenly came alive in January 1981, when Venkatram passed away suddenly, after a brief illness. Arun was there in our home, when he was needed the most providing not only moral support to the family, but spending many days organizing Venkatram’ s large collection of books and his writings. When I showed my interest on a book of quotes, he immediately gave it to me signing it in his inimitable style. Arun made it his responsibility to be at yearly Venkatram Memorial events that I used to organize and our brotherly relationship grew stronger with such regular meetings. To me it was somewhat strange and also commendable that Arun named his son as Venkatram. Over a period of time, I began to look upon him as a fatherly figure both because he was a member of the family and for his authentic knowledge and expertise on Socialism and Politics, Environment, History, Water, Health, Food and Cuisine etc. However, for someone like Arun, his ability to speak authoritatively seamlessly spread across subjects without a limitation.

I remember quality interactions with him on many of these subjects evoking in me my interactions with Venkatram on the same subjects. I could see his subject expertise and conviction of views, as well as influence of Venkatram, as he invariably quoted him as he spoke. Although I was the son of a great socialist and hence my heart was influenced by socialist philosophy, my personal belief was in the merits of a healthy capitalism. Similarly, my views on China were at loggerheads with Arun’s and hence, while trying to correct my views, he didn’t hesitate to admonish me. Our arguments and interactions were heated at times because of some conflicting viewpoints, but remained healthy and my respect for him grew all the time, because in him I saw a reflection of a facet of Venkatram. I accompanied Arun to some key meetings and saw his candid views with such luminaries as the Jnanapeeth Awardee late Dr U.R.Ananthamurthy, Noted historian Dr Ramachnadra Guha amongst others.

In recent years, our meeting became more frequent for number of reasons. He visited us for few days with Rahul Ramagundam who is doing a biography on eminent socialist leader George Fernandes. My visits to Delhi in connection our organic business became regular and frequent and on all such occasions, I invariably met him for breakfast or a meal. In most of these occasions, he insisted on cooking some dish or the other by himself.

For the past few years he wasn’t keeping well, which however didn’t deter him from pursuing his normal routine; his physical energy was low, but not spirits. When I spoke to him to invite him for my son Varun’s wedding in last April, he was affectionately angry, saying he didn’t need an invite; rather it was his duty to invite guests. We were fortunate that despite his illness he came with Purnima Bhabhi and Venkat, spending quality time with us.

Arun belongs to that rare breed of intellectuals who got disillusioned with our political system, didn’t aspire for any position or power, and moved away to contribute to our society in key sectors like water, global warming etc., making significant contributions.  Popularly called, ‘Panibaba’ in the northern India, no debate on water crisis could be meaningful without his participation. In fact, he made his last appearance on public platform in News 24 barely a week before his death. I watched him, speaking with his usual authority and expertise on water crisis in UP. On the show, there was no inkling of his impending death. As Venkatram had said weeks before he died, death is truly mysterious. Basking in the excitement and celebrations of the marriage of my son and the few days that Arun and family stayed with us, in no stretch of my imagination did I realise that there would be need to write this personal tribute.

Arun was one of those very few to whom I used to look upon in life. Like my father who remains an inspiration for whatever I do in life, sadly I will now miss Arun’s presence, and his brotherly care and fatherly affection.  Arun’s demise is a great personal loss.