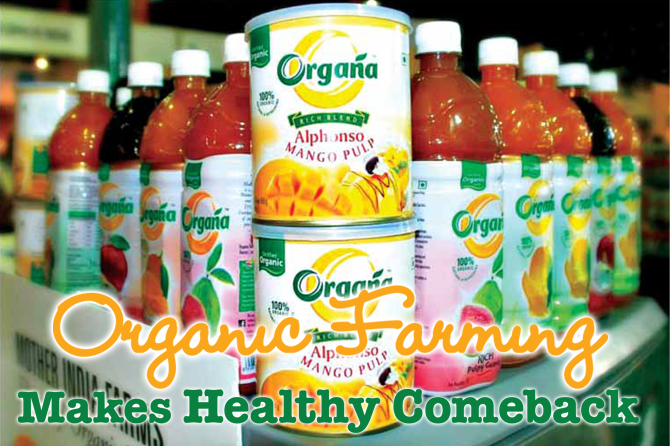 Organic farming was the only kind of farming India knew before synthetic pesticides and fertilisers flooded the markets. Now consumer awareness, industry initiative, and farmer interest herald a new beginning

Organic farming may be creating a buzz now but the practice is not new to India; quite the opposite. From 1924 to 1931, renowned English botanist Albert Howard (referred to as the ‘Father of Modern Organic Agriculture’), was director of the Institute of Plant Industry in Indore and agricultural adviser to states in Central India, during which time, he studied Indian farming practices and came to regard them as superior to conventional agriculture science. His observations on Indian organic farming are well documented in his book, An Agricultural Testament (1940), which served as a useful reference manual to scientists and farmers of the day. Therefore, the conversion of farmers to the original practice of organic farming is really a revival of a lost jewel—not an introduction of something new or alien.

Despite the international laud, however, an increasingly capitalistic world drove dubious policies in the name of the “Green Revolution”, which brought forth hybrid seeds and synthetically processed pesticides and fertilisers. Conventional food products employ chemicals at every stage of production, including chemical preservatives, flavouring and colouring agents.

In stark contrast, organic farming only uses natural pesticides and fertilisers to control pests and aid healthy production of crops. Natural fertilisers such as Jeevamrutha (a kind of liquid organic fertiliser), Panchagavya (concoction comprising five products of cow), and Vermicompost (compost made by using worms) enhance the fecundity of soil, while helping preserve biodiversity.

Now, due to awareness initiatives taken by stakeholders of the Indian Organic Industry, farmers are increasingly reverting to organic cultivation. The escalating costs of fertilisers, pesticides and other inputs, as well as, the increasing demand for organic products are further acting as propellants towards organic farming. Reforming to organic agriculture is simple, with minimal costs involved and no permissions required. However, norms and regulations are in place for certification of farms and products. Organic certification agencies, NGOs, and state government funded organisations offer necessary know-how to willing farmers.

Experts opine organic farming is the way forward for sustainable agriculture in the country and in fact, the world at large. To give you an idea, India produces over 3.88 million metric tonnes of certified organic products including a vast array of products, encompassing Basmati rice, pulses, coffee/tea, spices, fruits and pulp, processed foods, herbal products, cotton fibre, garments, cosmetics, etc. The organically farmed area is approximately 2 million hectares, which represents only 1.5 percent of the total farming area in the country. Were organic farming to become more prevalent, the numbers for production of certified organic products would skyrocket.

Howard was quoted as saying of organic farming: “The health of soil, plant, animal and man is one and indivisible.” This could not hold more true. In conventional farming, fertiliser and pesticide residues irrevocably enter the DNA of agro products. Moreover, the usage of chemicals in the garb of colour, flavour, and preservatives in conventional food processing can be extremely hazardous to health. For ex, many conventional foods such as breads, pizzas, etc, contain high sodium content and several soft drinks harbour pesticide residues.

The secret to good health is to be as close to nature as possible, and consume its bounty in as natural a form as possible. With improved taste, flavour and nourishment, the virtues of organic foods are multipronged. Making a commitment to healthy eating by consuming organic foods is a great way to ensure a healthier, disease free life.

According ASSOCHAM, 62% households in the upper end segment in the country prefer to consume organic products—a phenomenal increase of 95% in the last five years! Equally encouraging, export and domestic sales of organic products are currently pegged at a promising Rs 3,000 crore annually

R Durairaj, founder and CEO, established Mother India Farms [MIF] in 2003 to nurture acres of farms with traditional organic methods with a view to producing and providing quality products to global consumers. MIF’s vision is to practise and promote organic and sustainable farming and contribute to preserving biodiversity.

After having successfully exported organic fruit purees, spices and other agro products to Europe, MIF initiated an exercise to render support to conventional farmers in shifting to organic farming. The business model of MIF ensures increased productivity and higher remuneration to farmers, through value addition.

Taking this vision forward, in 2012, MIF launched India’s first certified organic beverage range under the brand name ‘Organa’. Armed with all the requisite organic certifications, the Organa range of beverages and fruit bars are now available across the country in organic stores, stand alone super markets, modern trade chains, as well as, online stores. With a brand mantra of premium organic quality with affordable pricing, Organa has won over the hearts, minds and taste buds of discerning Indian consumers in a considerably short span of time—carving out a tidy niche for itself in the high voltage and sometimes tempestuous Indian Beverages Market.

‘India Organic’ is a certification mark for organically farmed food products manufactured in India. The certification mark confirms that an organic food product conforms to the National Standards for Organic Products (NPOP) established in 2000. These standards ensure that the product or the raw materials used in the product were indeed grown through organic farming, entirely bereft of chemical fertilisers, pesticides, or induced hormones. The certification is issued by testing centres accredited by the Agricultural and Processed Food Products Export Development Authority (APEDA). Therefore, consumers and organic product retailers must insist on the India Organic logo on all products claiming to be organic, in order to keep the market pure.

The domestic organic market, till now nascent, is now evolving owing to rising disposable income. According to a survey undertaken by the Associated Chambers of Commerce and Industry of India (ASSOCHAM), 62 percent of households in the upper end segment in the country prefer to consume organic products—a phenomenal increase of 95 percent in the last five years! Equally encouraging, export and domestic sales of organic products are currently pegged at a promising Rs 3,000 crore annually.

Due to the arduous endeavours of the Organic Food Industry and conscious coverage by the media, consumers are being educated about the harmful effects of inorganically processed products and the healthier alternative solution—certified organic products—setting the stage for organic markets to grow exponentially in the near future.