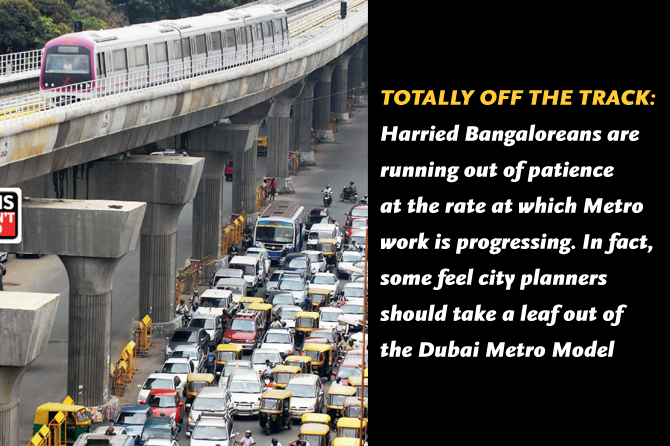 Having lived in Dubai for several years, I can’t but recollect the experience of the metro project there. In 2005, the Dubai project was announced around the same time as the Bangalore one. Therefore, with great curiosity and interest, I followed the progress in both cities.

TOTALLY OFF THE TRACK: Harried Bangaloreans are running out of patience at the rate at which Metro work is progressing. In fact, some feel city planners should take a leaf out of the Dubai Metro model

The Dubai metro project was an example of great planning and clockwork execution. On May 29, 2005, the project was announced and the following day the contract was signed. On March 21, 2006, the groundbreaking ceremony was inaugurated and the work began in all earnest. The most impressive part of the project was that the traffic in the project execution period was brilliantly managed, by constructing alternate good quality roads, diversions, proper barricades and protection, and traffic information system, which caused least inconvenience to the public.

Visiting Bangalore regularly for my work, I kept track of the Bangalore project, moving at snail’s pace. Further, the width of roads narrowed along the metro construction route and due to bad handling and maintenance, the quality of the roads were consistently bad. As compared to mostly pre-fabricated materials used in Dubai, the project in Bangalore presented a different, chaotic picture familiar to all of us.

The pertinent observation in this regard is that in the Dubai project, many Indian technicians, engineers and workers were involved, as is the case in Bangalore. The significant difference is the vision and efficiency, with which political administration in Dubai functions.

The most amazing aspect of Dubai Metro was however, the launch date. As early as 2008, the project authorities announced the launch date as 09-09-09. The announcement triggered a hectic schedule of 24 hours of work every day in three shifts. Indeed, Dubai metro was launched on the specified date.

The question is if Dubai metro could announce the launch date a year in advance and stick to it, why’s it the same thing cannot happen in Silicon city. The two metro projects are not just separated by two years; they are significant of the quality of project planning and execution. The manner in which our political leaders announce the launch dates, seemingly without an assessment of ground reality or a strong commitment to a public promise, is typical of the way, things work here. The Dubai metro is all about how a public project has to be handled and Bangalore, the opposite-how it shouldn’t be handled.

A new launch date for Bangalore therefore isn’t the issue. The question is whether the metro is planned and executed well; whether it will ease our traffic situation and whether it will add to our problems. Going by reports that there are no parking facilities, we will have some new problems to tackle.