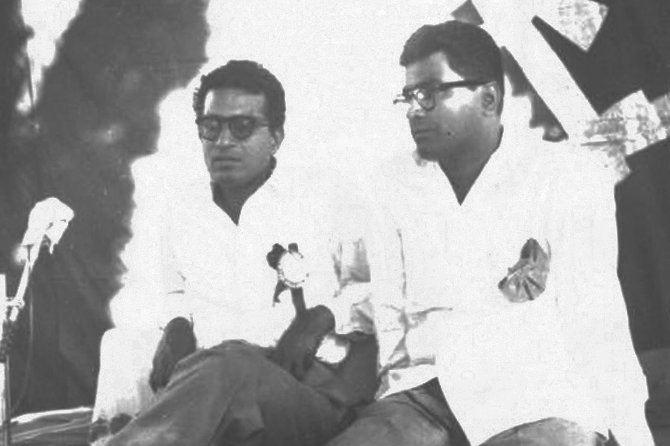 I have been pursuing a career in Management for long; yet, as the son of Veteran Socialist and Trade Union Leader Late S Venkatram, I have been a keen observer of the Indian political landscape.

Having met and interacted with leaders from different affiliations fighting political battles and later occupying powerful positions, Mr George Fernandes is one who has impressed me the most. A charismatic and aggressive leader, Mr Fernandes was strongly committed to the cause of the downtrodden and workers, and has left behind an indelible mark in Indian politics.

Going back in memory lane,I remember the 1967 Loksabha elections when Mr Fernandes defeated the Congress veteran SK Patil, in an unprecedented victory in Mumbai and began to be called as George-the Giant Killer, an acronym he lived up for rest of his life.

I had the privilege of going along with Venkatram, on many of his political and trade union work related travels. A few visits with him to Madras at different points of time related to Southern Railway Mazdoor Union, affiliated to All India Railwaymen’s Federation, for which Mr Fernandes used to be the President. I also distinctly remember the Socialist party conference in Mysore on 12th October, 1967, the day when we got the news of Dr Lohia’s death and all the leaders of the party rushed to Delhi. In all such travels, I was privy to constant interaction of Venkatram with Mr Fernandes on political and trade union matters.

Continuing my journey with Venkatram, I landed up in Delhi during 1970-71 when Venkatram was the joint secretary of the Samyuktha Socialist Party [SSP] and Mr George Fernandes, the General Secretary. During this period I happened to meet Mr Fernandes more often and had the opportunity of seeing both of them work together in the party office at Delhi. He seemed like a warrior with abundant energy and a workaholic.Although my interactions were brief, owing to his busy schedule, his charismatic personality made a lasting impression on me.

I remember two important occasions of my meeting Mr Fernandes. One was a get-together at our home in Delhi, when all the leading socialist leaders of that era were present including Mr Fernandes, Mr Madhu Limaye, Mr Raj Narain, Mr Kamlesh Shukla, Mr JH Patel, and Venkatram. The second was a get together in Mr Fernandes’s home.As I returned to Bangalore during the second half of 1971, my meetings with Mr Fernandes became few and far in between, although he remained an integral part of Venkatram’s activities. As close associates on a common mission, they traveled together building the Socialist Party as well as Hind Mazdoor Panchayat/Hind Mazdoor Sabha. Their close association never meant always agreeing with each other, but the differences often led to healthy debates and a decision in the best interest of the common vision.

I fondly recall their long telephone conversations, exchange of letters and even post cards. Often assigned the task of filing papers, I happened to read them with interest and curiosity. Some of those letters are still with us in old files and could be testimony to the kind of comradery and mutual admiration and respect between them. It was noteworthy, that Mr Fernandes replied every single letter of Venkatram, a practise that he continued even later when he held cabinet positions.

The opposition to Indira Gandhi’s government was slowly building up and reached a crescendo in 1974. Railway strike organized by Mr Fernandes in which about 17 lakh employees struck work, price rise, students’ agitation and an adverse verdict in Allahabad high-court invalidating Mrs Indira Gandhi’s election created fear and panic in the Congress camp, and led to the declaration of emergency on the night of June 25th, 1975, a few minutes before the clock struck midnight. All the top political leaders from the opposition camp were immediately arrested and press censorship introduced. However, Mr Fernandes, Venkatram and several other political leaders went underground to fight the emergency. We didn’t see Venkatram for months and came to know that he was travelling extensively, leading the underground movement in the south. Years’ later we came to know, that Venkatram and Mr Fernandes even disguised as Sikhs and carried out the underground activities.

It was during emergency that I found Mr Fernandes most dynamic and aggressive, taking huge personal risks, organizing a counter campaign to disseminate information about the draconian measures taken by Mrs Gandhi’s government suppressing democracy. As I understood, a key strategy was to organize harmless, low-intensity blasts at several key locations to let people know the opposition campaign was alive and kicking, raising hopes of bringing back democracy. Utilising his wide spread contacts in the socialist world, he succeeded in bringing international pressure on Mrs Gandhi. Eventually, he got arrested, and wasimplicated in Baroda Dynamite Case. The photo of Mr Fernandes’s raised and handcuffed hands, and his declaration, “ The chains that we bear are symbols of the entire nation which has been chained and fettered”, remains a symbol of the fight against emergency and an inspiration to all those who fight for democratic rights across the world.Mr CGK Reddy, freedom fighter, and Socialist, in his book ‘Baroda Dynamite Conspiracy” explains, “the socialist underground movement was not only about dynamite as is often made out. The aim was to generate publicity, letting people both in India and abroad know of the widespread opposition to the Emergency”

Mr Fernandes was arrested on June 10, 1976 and later imprisoned in Tihar Jail for about ten months. My maternal uncle Mr Ramachandra Rao [fondly called as Ramu by Mr Fernandes], and his family were regular visitors through whom we could get updates about his well-being. Despite living a tough life behind the bars, his commitment to the cause of democracy and the spirit to carry the struggle grew only stronger. “Mr Fernandes continued his aggressive stance, his face showing the anger against the Government for its anti-democratic measures. He even wanted to argue his own case in the court”, recalls Mr Rao. Mr Fernandes kept abreast of the developments on the political front and wrote important letters from the jail to key political leaders like Mr Jayaprakash Narayan and Mr NG Goray, influencing them to carry the struggle and not yield to Mrs Gandhi’s negotiating tactics, which would have resulted in compromises.

Eventually, the emergency was lifted in January 1977, and elections to the Loksabha were announced. Mr Fernandes was the only leader who wasn’t released, but he won the election from Muzaffarpur with a huge margin, despite being imprisoned. Thus, in post-independence India, perhaps it’s only Mr Fernandes who carried the fight straight into an oppressive government, akin to similar fights in the pre-independence India by several freedom fighters. Dr UR Ananthamurthy, Author & Jnanapeet Awardee, said in an article in 1977, “After Subhash Chandra Bose, only George demonstrated courage and adventure and is a hero of this era”.Indeed,post 1977, no one could halt Mr Fernandes’s rise in the political landscape of India.

The Janata Party government came to power in 1977 and as a Cabinet Minister, Mr Fernandes held several portfolios.I remember in April 1979, despite his hectic schedule as a cabinet minister, he attended my brother’s wedding reception and spent time with us. Unfortunately, the Janata experiment failed in a few years disappointing everyone, including Venkatram, who died on 20th January 1981.The last I saw Mr Fernandes was when he joined us in the funeral of Venkatram. As Venkatram lay still in the hearse, he joined us; tears were rolling down his eyes, having lost one of his closest associate.Looking back, like a true comrade, he stood with us in happiness and sorrows.

Although I didn’t get an opportunity to meet Mr Fernandes after this, I kept track of him as a public figure and knowing more about him through people who worked with him or interacted directly. My mother Saroja Venkatram did meet him a few times in public functions and every time, he made it a point to speak to her and enquire about our well-being. Later on,he floated Samatha Party and aligned with the BJP and others, forming NDA government, holding key cabinet positions and efficiently handling them. As a Defence Minister he made over 18 visits to Siachen glacier in Kashmir, a feat accomplished by no other Minister. His record as Defence Minister is extremely noteworthy, as he set new benchmarks for the ministry and was a very effective spokesperson and Convener of NDA. Mr Sanjay Baru, Media advisor to Mr Manmohan Singh, Prime Minister in UPA-1, in his book, ‘The accidental Prime Minister’, writes, “The NDA benefited from the coalition Spokesman and George Fernandes did a good job in this role”

Dr UR Ananathamurthy, in a long interaction with Mr Arun Kumar and myself in 2012,said, “George could have become the Prime Minister and many political leaders of the time strongly believed the possibility”.His leadership of an underground movement against emergency and efforts to bring democracy back in 1977 will remain unparalleled in the history of post-independence India. Mr LK Advani in his book, My Country My Life, aptly calls George Fernandes, as a hero of the anti-emergency battle.

Few years back, in an interview, Mr Fernandes was asked, “What’s politics?” and he replied, “People”. Elaborating he said, “Politics must bring happiness and eliminate sorrow of people”.This is indeed a remarkable definition of politics and reiterates his commitment to fight relentlessly for civil liberties and for the betterment of the workers and downtrodden, throughout his life. Truly, he’s one of the most charismatic heroes of the post-independence India. Amongst political leaders across the globe, Mr George Fernandes would be listed as one who literally sacrificed his life, to uphold the principles of human dignity and liberty.