Garden in the desert 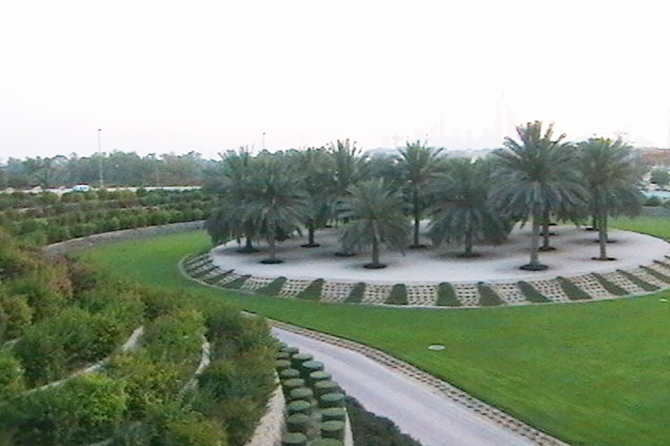 Living most part of my life in Bangalore and having fallen in love with the city, it wasn’t exactly a great idea to move to Dubai, right in the middle of the desert.

From the windows of the ascending flight from Bangalore, I looked down at various water sources and the lush green surroundings of our city and prepared myself to bear the heat package, coming with the career move to Dubai. From the descending flight I couldn’t make much of the Dubai’s topography as the atmosphere was hazy, However, I could see some of the high-rise buildings, flyovers and a seemingly smooth traffic.

However, all my fears were unfounded as we went down the airport flyover into the main city. I could see large beds of flower decked medians bisecting the two sections of the five lane roads. Pink and white bougainvilleas bordering beautiful lawns and green shrubs stretched for entire sections of long medians running into kilometers and looked as if they were artificial, as it was difficult to believe that the growing and manicuring could be as perfect in a desert. In the next main interchange with multiple flyovers, exits and throughways, the entire stretch was bedecked with yellow and red marigold flowers and with neatly manicured lawns and various shades of green shrubs, the look was fantastic.

My initial experiences turned even more pleasant as I explored and discovered the city. Dubai is indeed the city of “Fascinating Parks” and has the largest number of organized and diversified parks in the Middle East. In addition to flower beds and lawns adjoining the roads and sidewalks, the city has as many as seven major parks of sizes matching our Lalbagh and Cubbon Parks. They have facilities such as internal train, cottages to hire, children’s equipped play area, clean wash rooms and dining areas with wooden centre tables and benches or chairs around for the family to sit with canopies and facilities for doing barbeques and also restaurants. The Dubai municipality has ambitious plans to build another 29 major public parks and 45 neighborhood parks with jogging tracks in all residential areas. Further it conducts a special event called “Flower Surprises” during the increasingly popular Dubai Summer Surprises, which draws visitors from across the world.

The jogging tracks around some of the popular parks are done in great taste. The new Zabeel Park has a 4.2 kms jogging track which is done in great taste using cement interlocking tiles and painted artistically in terracotta. The distances marked every hundred meters, is especially useful whether you are jogging or walking at your own pace. While this is usually the place for my evening walks, I also discovered the soft and soothing benefits of a gentle massage of the feet while walking barefoot on the green lawns, which is very surprisingly not restricted here. Interestingly, the per capita consumption of water in the UAE is one of the highest in the world, one reason being consumption of water for maintaining the greenery through extensive sprinkler irrigation systems.

So, if you happen to visit Dubai, don’t miss visiting the Creek side park with superb views of the city. This park also hosts a unique show of light, music and water during the famous Dubai Shopping Festival. Today, as we drive around, we will find a fine blend of modern buildings and infrastructure of roads, highways and freeways, together with well planned and executed projects of landscaped green areas around flyovers and sidewalks; major parks and neighborhood park projects; Free Zones areas, major corporate houses and residential buildings.

The density of traffic is as high as any modern city but with pure fuel, the pollution is much less than our cities. For example, SPM is in the range of 250-400 in Bangalore, but in Dubai it is an average of around 140. The air is therefore clean and fresh and it’s common to see people driving with open windows. No wonder, convertible cars and sun roof cars are extremely popular. While standard of living in India has tremendously improved, we still lack in terms of urban infrastructure affecting the quality of life. Having lived now in Dubai for few years, I cannot but admit my weakness for Dubai-my second love. Ask any resident of Dubai and you will find great admiration for the Government of Dubai which constantly strives to build a modern city and provide its residents, the highest quality of life comparable to the best in the world. Dubai is therefore not just a city of Gold, but also a Garden in the Desert.